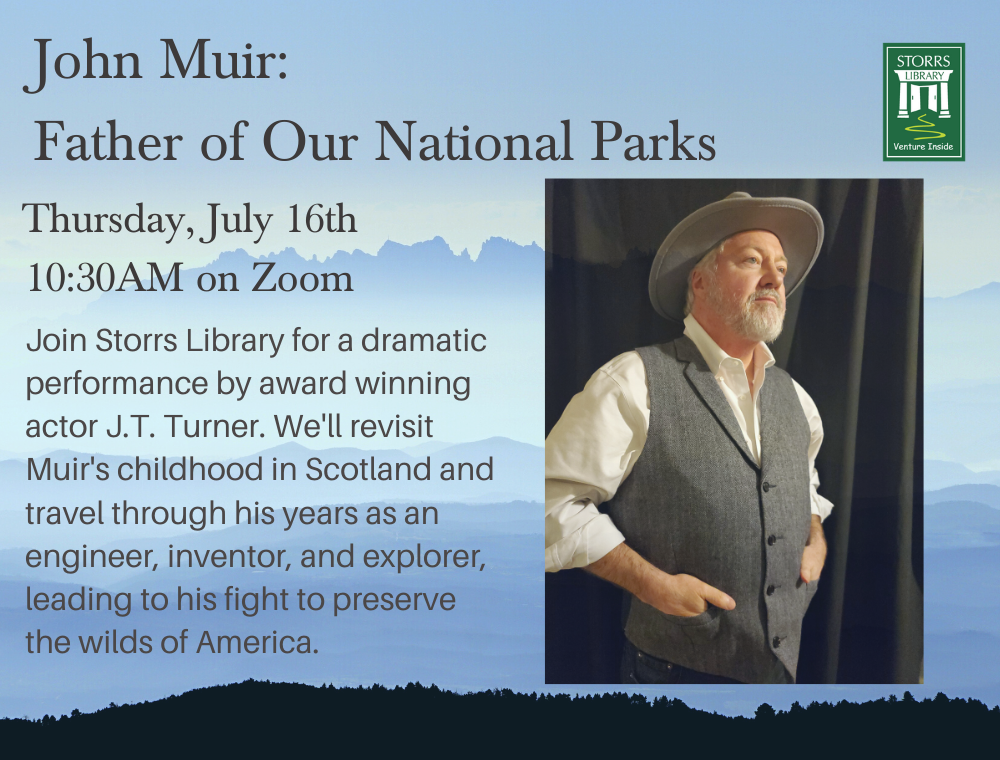 John Muir was a brilliant inventor who went through a life changing  to become  one of the world’s most recognized and impactful  conservationists.  His writings have inspired millions to take to the outdoors, and re-discover the beauty and importance of nature. Now, the father of our National Parks shares his personal story with you. Using passages from Muir's own works, and a depth of research into his life and times, award-winning actor J.T Turner celebrates the life of this great American immigrant, philosopher, and writer. This is a first person dramatic performance that will transport you from Muir's childhood in Scotland, through his years as an engineer, inventor and explorer, to his fight to preserve the wilds of America.

The Actors Company’s J.T. Turner (AEA, SAG-AFTRA, IRNE Award winner) has toured theaters, museums, schools, historical sites, libraries, and events all over the U.S. with his original one-man shows, including "The Adventures of Benjamin Franklin," “Shakespeare’s Ghost,” "Robert Frost, Light and Dark," "A Visit with C.S. Lewis," "Charles Dickens in A Christmas Carol," “Washington Irving in The Legend of Sleepy Hollow,” “A Visit with Aesop,” and more. His original play “Within These Walls” was featured at the Smithsonian Museum of American History. J.T. is also a professional circus ringmaster, Qigong & TaiChi instructor, fight choreographer, and acting, accent and public speaking coach.

We will be using Zoom for this presentation. You will need a computer, smartphone, iPad, or similar device that has a camera and audio ability.
New to Zoom? Watch one of their short videos to help you get started: Join a Meeting or Joining & Configuring Audio & Video.
New to videoconferencing and web chats? Download our Video Conferencing Privacy Tips handout for steps that you can take to safeguard your privacy online.
Register in Advance.  You will receive an email invitation to join shortly before the program begins.
Date:
Thursday Jul 16, 2020
Time:
10:30 AM  -  11:30 AM
Location:
Zoom
The registration period has ended.